Much is asked of New Yorkers, from high rent, congestion, overstuffed subway cars, and extreme weather conditions, to crowded tourist traps, inconsiderate asses who stand in front of subway doors, and dealing with being attached to a country that is determined to repeatedly vote against its own interests. For this it is fair that we ask and receive some things in return.

We ask these things as citizens, family members, customers and as members of various groups. When forking over that hard earned cash that’s made just a bit more discretionary by subjecting ourselves to living with perfect strangers it is right and fair that we receive in return something of value and quality. Perhaps a steal is too much to ask for but a fair deal nonetheless.

Prices continue to rise everywhere, the beer scene being no exception. So what are we getting for those ducketts? There’s the marked up pint. What else?

My top priority in a beer bar is naturally the beer but that’s not all that goes into my preferring one place to another. Many ingredients get tossed into that meat grinder of judgement. Depending how well the various aspects of any one bar mesh determines the final reaction. Among complementary aspects that make beer taste even better are location, clientele, kitchen, television (the fewer the better), and acoustics, by which I mean both ambient noise level and/or background music, if any.

Again, what are we getting in return for those thrice taxed dollars? General ambience, heating during the cold months, some television (say it with me, “the fewer the better”), perhaps pretzels, and water.1 A convivial bartender. Now we’re talking, now we’re getting somewhere. And what do you have for food? I see a nice spread on the menu but can it be trusted?

If you’re going to spend time and money drinking and eating at a place you want some reassurance as to the quality of the products. Caveat emptor and all that carpe.

One of the most natural things to offer alongside craft beer is food. On an Epicurean level beer pairs well with about any dish out there and there are few things more adept at creating a convivial atmosphere than drinking and eating.

Going to a bar should be a happy occasion. The more things you have to look forward to when you head out the better your chances of enjoying yourself. There’s the camaraderie of a close group of friends, the prospects of attracting new people, catching up with old acquaintances, and of course enjoying your libations. I prefer my beer, as you well know, but whatever it is you drink make sure it’s something you enjoy.2

Another feature to look forward to when heading out, and increasingly so, is the grub. The food offered at craft bars is becoming ever more spectacular and would be unrecognizable as pub fare if it weren’t for the dozen or so taps on the wall. It’s not just Buffalo wings and onion rings that can be appreciated alongside a pint nowadays.

I am very often swayed by which bar to go to based on the kitchen. Listen, a good bar rotation will pull me in with its siren song but I’ll make sure to work in that other bar’s kitchen/menu as needed, whether it’s where I start or end up. Naturally with food preparation of any kind you want to have some reassurances about the quality of what ends up on your plate and that’s a story that begins long before the dish is put in front of you, just as it does for your pint.

We will not be going as far back as the farm in this piece but we will take it back a couple of steps into the kitchen itself to see what it is we are up against when we pony up to the bar of our choice for a pint and a bite. I’ll be focusing specifically on the criteria of cleanliness and hygiene. This is not a shame piece so I will not be calling out particular bars but the reader has the ability to judge for themselves.

Like any self-respecting city of the 20th century New York City does health inspections of, among other things, restaurants. Like any self-respecting 21st century city NYC makes this data openly available. Inspections are unannounced yearly occurrences where an establishment receives a certain number of points for each violation, critical or otherwise. The points are tallied up per inspection and a final grade (A, B, C) is based on the resulting score, the fewer points the better.

Taking the top 30 craft beer bars of Manhattan as identified on FourSquare I set about gathering their respective scores, code violations, and grades.3 I did the same for all other inspected establishments in Manhattan, bar or otherwise.

The craft beer bar inspection average of 12.89 just qualifies for an average grade of A. The same average for all other non-craft beer bars is 14.68. This difference of 1.79 pushes the other establishments over the points threshold into a Grade B average. 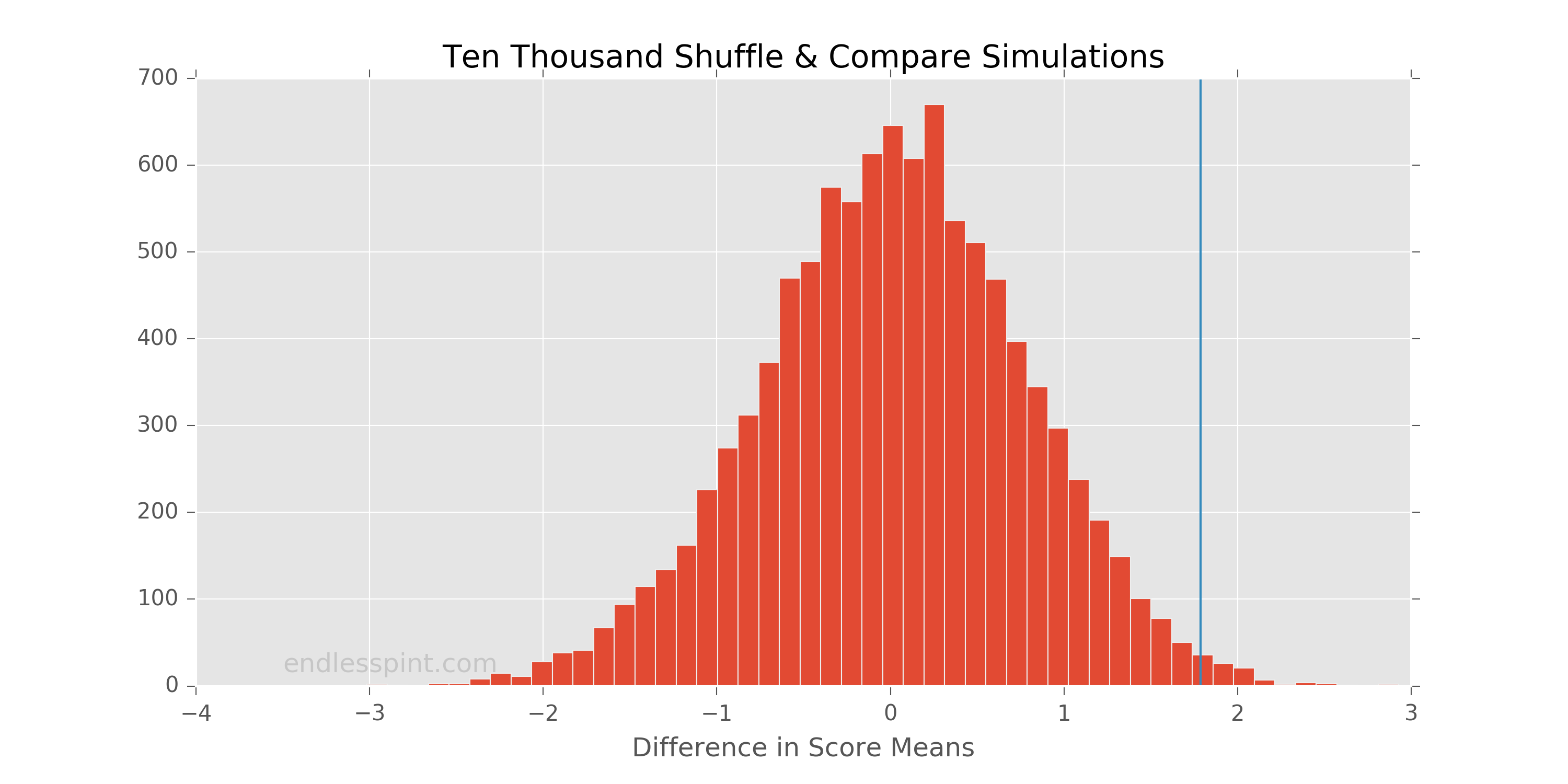 On top of this being a 10% difference it is a statistically significant one as well. This was established via a ho-hum t-test and by running a shuffling and sampling of the two populations. Not only are you much more likely to find better beer at these establishments than at a random place but you’re also more likely to find a cleaner kitchen.

I am Jack’s clear conscience.

Below is a timeline of the 30 craft beer bars considered. Each horizontal line and their attending dots represent one establishment. The occurrence of the dots appear at specific times (x-axis), may be multiple for an inspection, and are colored as to their severity (red for critical, yellow for not critical, and gray for not applicable). The lines themselves stretch from the earliest inspection date recorded to the most recent. In the couple of instances of there being only one inspection to date no line is present. 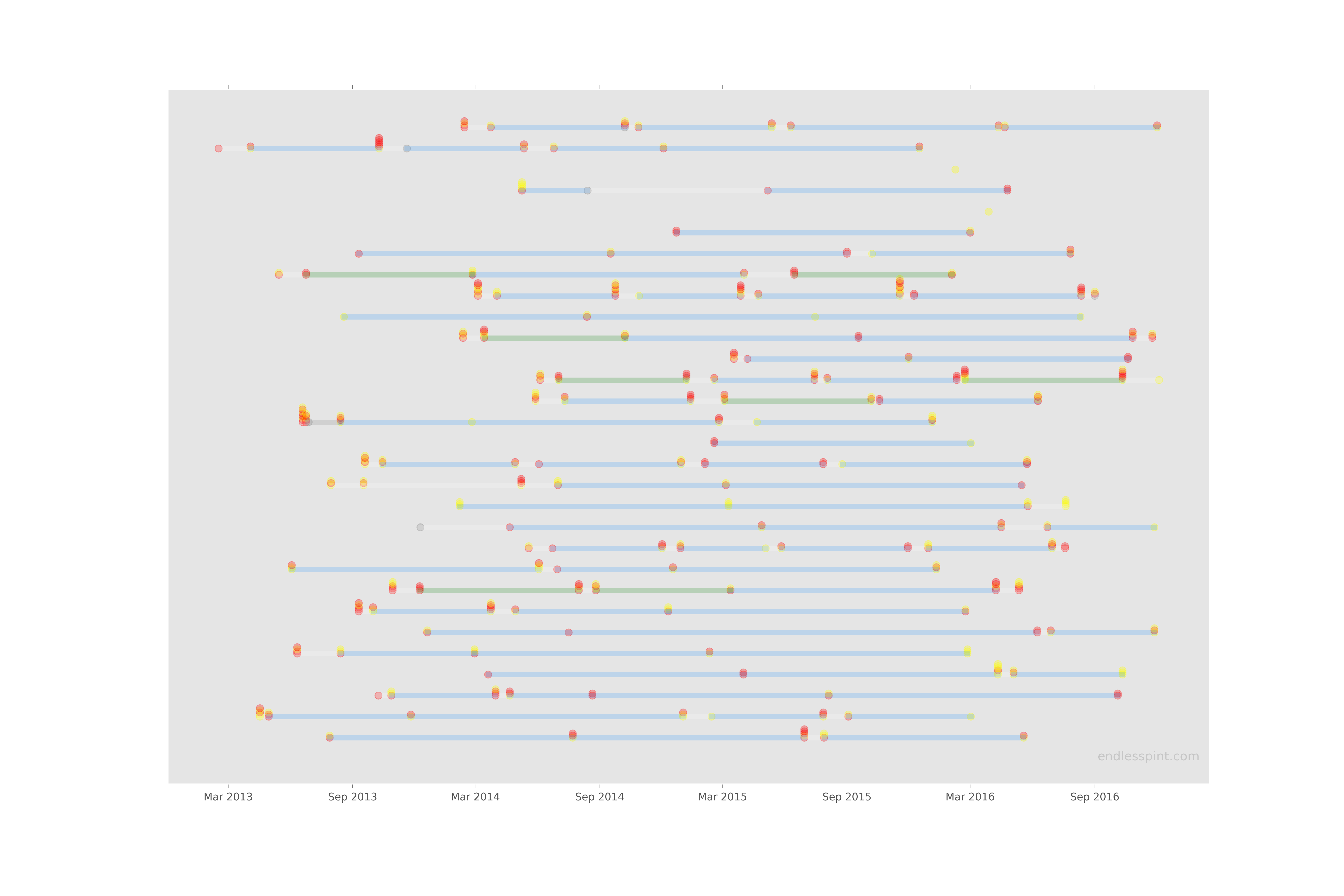 The lines serve several purposes. First, they make the reading and grouping of the dots per establishment clearer. Second, they provide a convenient means of comparing length of inspection ranges between bars. Lastly, the lines themselves are color coded to convey information as to the grade carried by a bar. These colors match the NYC grade color scheme where meaningful. Thus the grades A, B, & C are rendered as blue, green, and orange, respectively (no “C’s”, hooray).

Inspection dates need not always result in a new or retained grade. I use white to indicate when there is no grade given out for a specific inspection date. This color will be extended until the next grade. As best as I can ascertain grades are retained unless specifically changed, even so I prefer this color scheme to at least differentiate the awarding/retaining upgrades. The color gray is also used, though difficult to see, for grades of “P”, passing. One particular feature of the open data not visualized are the violation points incurred per inspection.4

Beer, Not just for Breakfast

Was I relieved by the findings? Certainly with respect to my past stomach exposure. I also wish the craft bars under inspection well if for no other reason than to allow for their continued serving of my main reason for frequenting them, the pouring of delicious pints. Alternatively, I would hope that for the hefty price stuck on these beers we would be provided with some perks. A clean kitchen is definitely a good start.

I leave for another time the analysis of the cuisine itself. A quick look around made me reconsider expanding the scope of this piece. Perhaps if Zagat had some quick numbers to glean insight from, but in many instances that fine New York establishment does not even offer food ratings on these locales. So be it. Having now established some small appreciation for the quality of the preparation and handling of the food it would be a natural extension to see about the quality of the chow itself. Stay tuned or, if you’re reading this sufficiently far into the future, follow the link to that next piece I intend to place below.

1 At least New York City water is the best in the world, so there’s that. ↩
2 Damn the condescending neck beard with the judgemental outlook. ↩
3 Actually 28 of top 30 FourSquare locations were identified, the other two either have no kitchen (Carmine Street Beers) or have never been inspected/cited (Milk & Hops), either way I replaced them with two substitute craft beer bars, Amity Hall & Malt House, to keep the number at 30. ↩
4 The inclusion of linewidth variation to portray violation scores proved, for the time being anyway, a bit too much to include. I submit a small version of the image here and move on. ↩ 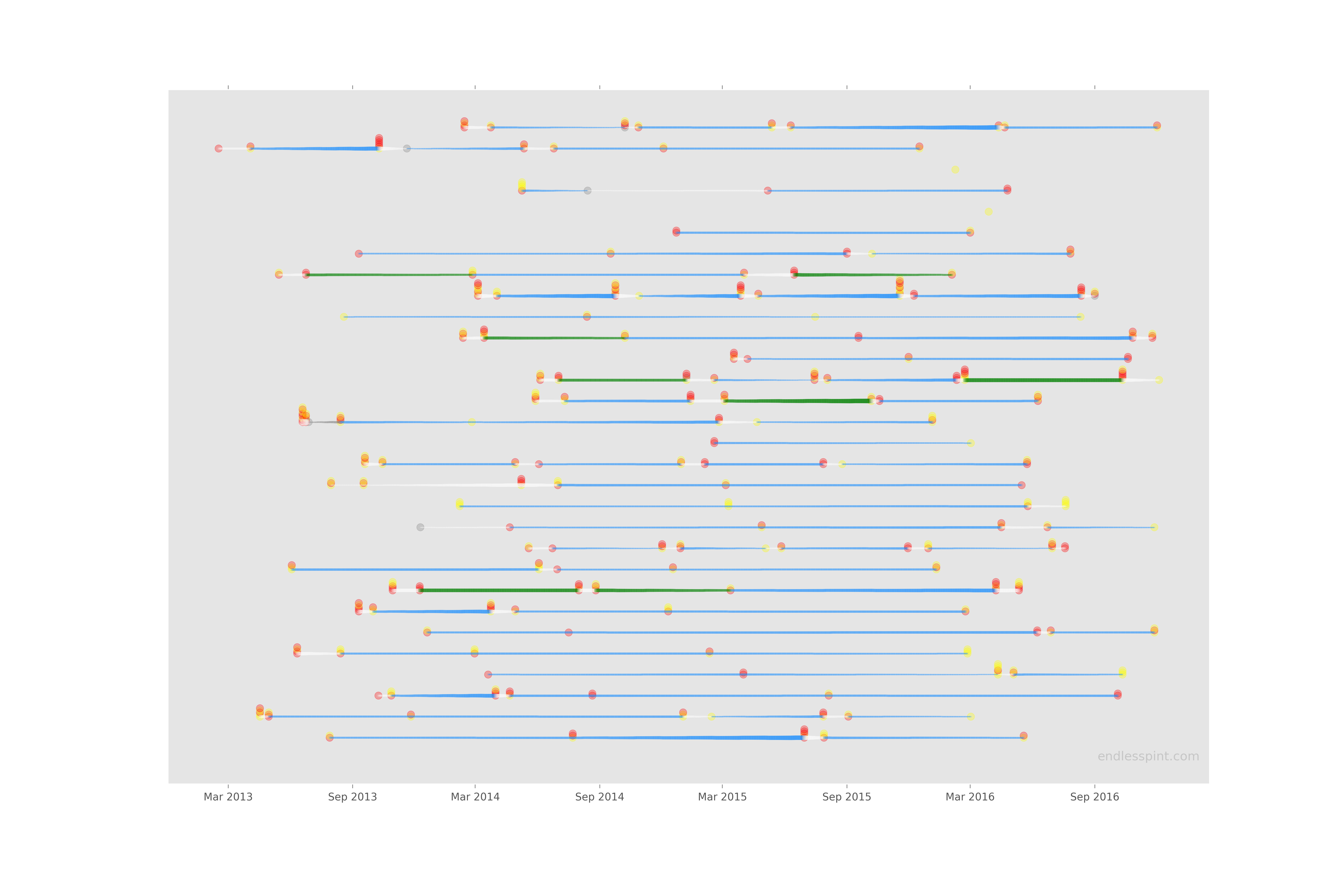 By dropping me a message about "May I advise against the lady eating the clam chowder?", forwarding to a friend, tweeting about it and/or signing up for the newsletter to receive advance notice of posted content, added site features and opportunities to make suggestions for future data-related beer pieces and miscellany.