No Beer Style is an Island onto Itself

Capturing the link relationships of beer styles offers an opportunity to discover connections and patterns not immediately apparent from simply reading the information or following the recommendations on an one off basis. Leveraging the insight that informed the PageRank algorithm and unleashed a little company called Google upon the world, we can traverse the directional links, the recommendations from one beer to another, to identify the highest scoring beer style as a function of references.

The PageRank algo is inspired by academia and paper citations, specifically. The reasoning goes that the more high quality citations a paper has, the more important that paper is. Citations from six major works are worth more than six, or a hundred, from unimportant papers. How do we determine the quality of the citations? By the number/quality of the papers citing them. This smells of an endless regress but the papers do eventually run out and the math is up to the task of determining the scores once the universe of documents are identified and their citations captured. What was inspired by academic publications1 and wildly successful in rating web pages can be turned upon our toy set to determine the rank of the beer styles.

Instead of web sites we have beer styles, instead of hyperlinks to pages we have recommendations. Propping a random beer style in front of an imaginary drinker, with an obscenely high tolerance, and having them go from beer to beer based on the recommendations, and repeating this “thought experiment” hundreds of times, we calculate the frequency/percentages that they arrive at each beer style. The most often visited styles get the highest scores.

In some respects this retains the idea of drinking at random but with the constraint of picking the next beer only from the recommendations made from the present style. You may have noticed a shortcoming to this simple approach. I point you to the link and node visualization to provide a hint. What happens for beers that have no incoming recommendations, either because they are floating out on their own or they provide recommendations to other styles but are never returned the favor?2 This is where randomness comes to our assistance. Called the random surfer, as in web surfer (nee random tippler for us), for some small fraction of choices we hop around completely unrestrained, so as to help us see/taste all pints (usually set at or around 15%, as we did here).

The highest scoring beer by this method is the Belgian Dubbel. Though it cannot boast the highest quality links it makes up for this shortcoming with quantity, which has a quality all its own. The Belgian Dubbel has the highest number of incoming links, as well as the most unique grandparent styles that indirectly recommend it. We focused on unique beers to avoid double (pun!) and triple (pun! x3) counting styles in the lineage. As expected, these grandparent beer styles also carry solid average ratings. The rich get richer, which is something we see in many disciplines and studies (Matthew effect).

A closer look at parental influence

Below is a stylized presentation of the 12 parent styles that feed into the Belgian Dubbel. Each of the beer style nodes is colored according to the mean SRM values of the range possible, as provided by CraftBeer.com. With 12 inputs it was a quick leap to considering a watch face as a representation type. Using the standard positions of hours on a clock, the highest scoring input is at the 12 o’clock position, the smallest at one o’clock. Thus, moving around the parents in either a clockwise or counterclock wise rotation will provide the reader a relative scale as to the PageRank of input styles. 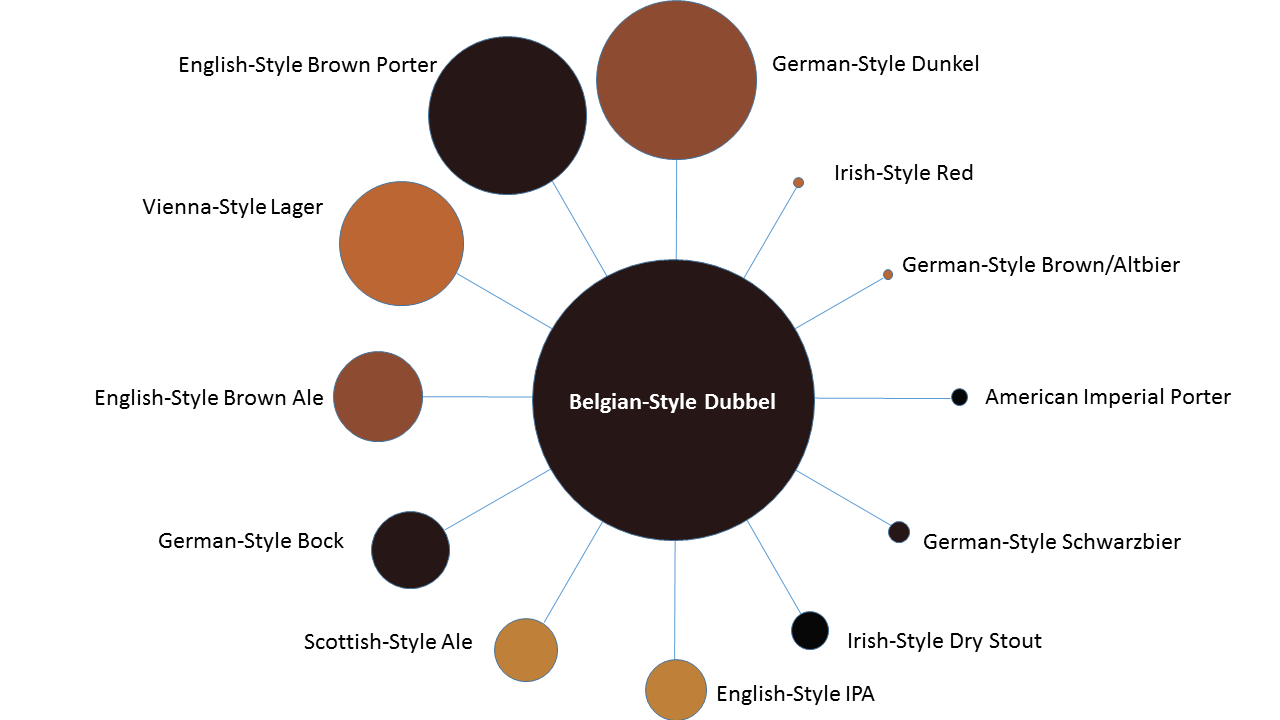 That Belgian Dubbel scoring highest does not necessarily mean it will, or should, be the highest selling style. For one, the market may still be traversing these links and not settled on the model’s expectations. More likely, tastes vary over people, time, and fashion. Just because there is a bridge between two styles does not ensure that most will cross it and having crossed it does not mean they will return. What this PageRank may suggest to brewers and marketers are avenues of positioning their beers to capture more of the natural affinities between styles.

As we should do with most (all?) things data we question the results and see what assumptions were made and how this matches up with our experience and the larger expectations of society and the market. A few things about the data: it covers a lot of styles (70+) but certainly not all, that is something worth remembering; the links are from one reference source and could benefit from a second, third, or tenth opinion; preferences and opinions change over time, these links are not set in stone though some are less likely to be modified than others; the majority of recommendations/links are one-way which works well for this exercise but may be overly restrictive; moreover, the links are equally weighted, regardless of whether or not they point to a beer style in the same category or one considered wholly unrelated.

This last point bears expounding on if only to show the decisions that go into capturing data and how numbers are not as objective as they so often are portrayed. Each recommendation is considered to be of equal weight when we can all bring to mind certain beer styles that lend themselves more strongly to recommending another. A naive, but well founded, approach would be to give extra weight to beer recommendations within the same category. Conversely, we may decide to give extra weight to recommendations across categories in order to preference wider exploration.

Besides the links between the beers we also begin with the assumption that each beer is of equal value. Our simple implementation works off of this assumption but we may decide to introduce some discretion as to the hedonic quality of each style.3 To finish we will remind the reader that when and in what environment these beers are to be enjoyed in is not even considered. There is instead an idealized state implied, but setting and food are a major influences on what is “best” to drink. End of the day, even when it is just beer, you gotta stay skeptical.

By dropping me a message about "Data Guide for the Beer Perplexed V", forwarding to a friend, tweeting about it and/or signing up for the newsletter to receive advance notice of posted content, added site features and opportunities to make suggestions for future data-related beer pieces and miscellany.