Being the most prestigious beer competition™ one could be forgiven for expecting breweries to want to gain a World Beer Cup medal. As a light draws mosquitoes so would the wBC draw beers, to my thinking. With that idea in mind I was inspired by various questions1 to take a look at visualizing and summarizing the competitions through the years.

I had several expectations going in: 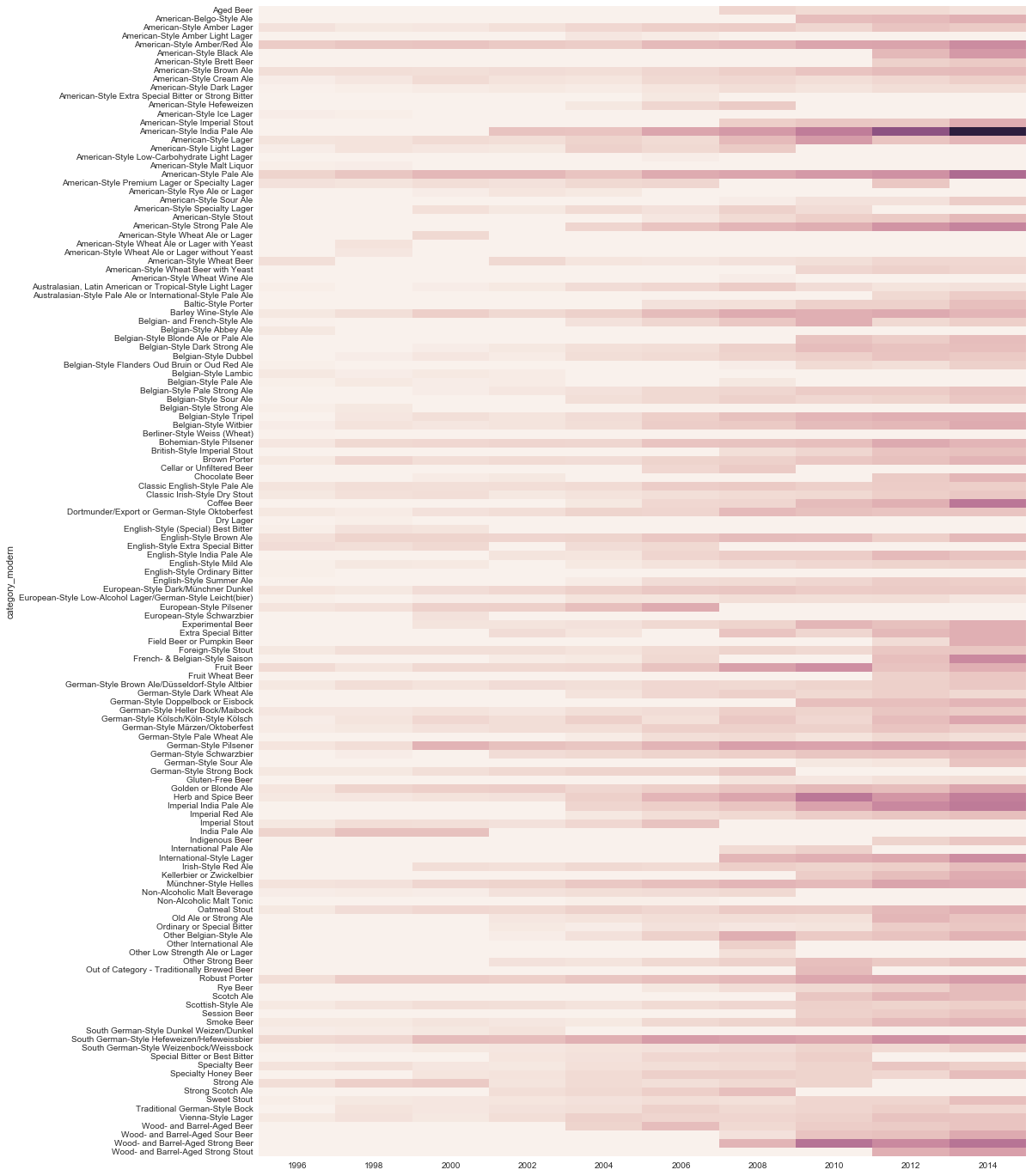 Above is a heatmap representing the number of contestant entries by WBC beer category for all past competitions (1996-2014). The beer categories are listed on the left in alphabetical order, the years appear across the bottom (left to right chronologically), and the darker the color the more entrants. Of course, the lighter the color the less entrants, with white indicating no entrants/competition for that beer style that specific year.

The above chart can be improved upon in a number of ways to allow it to deliver additional information more effectively. Two such improvements are implemented below. A scale has been added to the right to provide the user an idea of the size of numbers we are dealing with and not simply think of the entry counts in relative terms from one category and/or year to another. Additionally, the beers have been sorted in descending order of entrant counts for 2014 and 2012. This is a simple means of creating some level of order and allow quicker user lookup by category popularity, for lack of a better word (which I am routinely at a lack for). 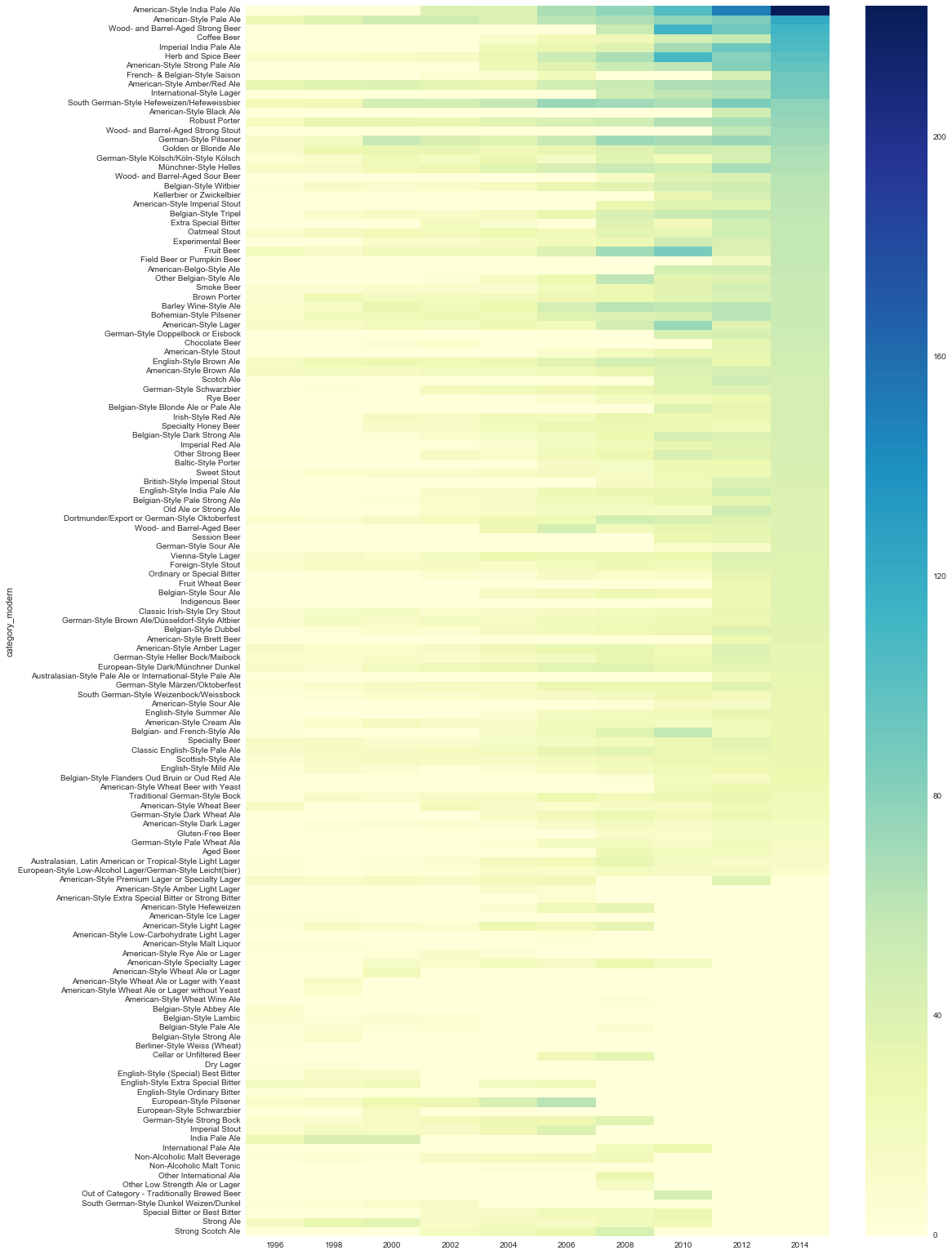 Admittedly the charts have been a lot to process due to the large number of beers/rows. Let’s look at a subset of the above. We’ll keep the improved features of the scaled color bar and sorted values and additionally filter out beers that have not appeared in every competition (again, 1996-2014). 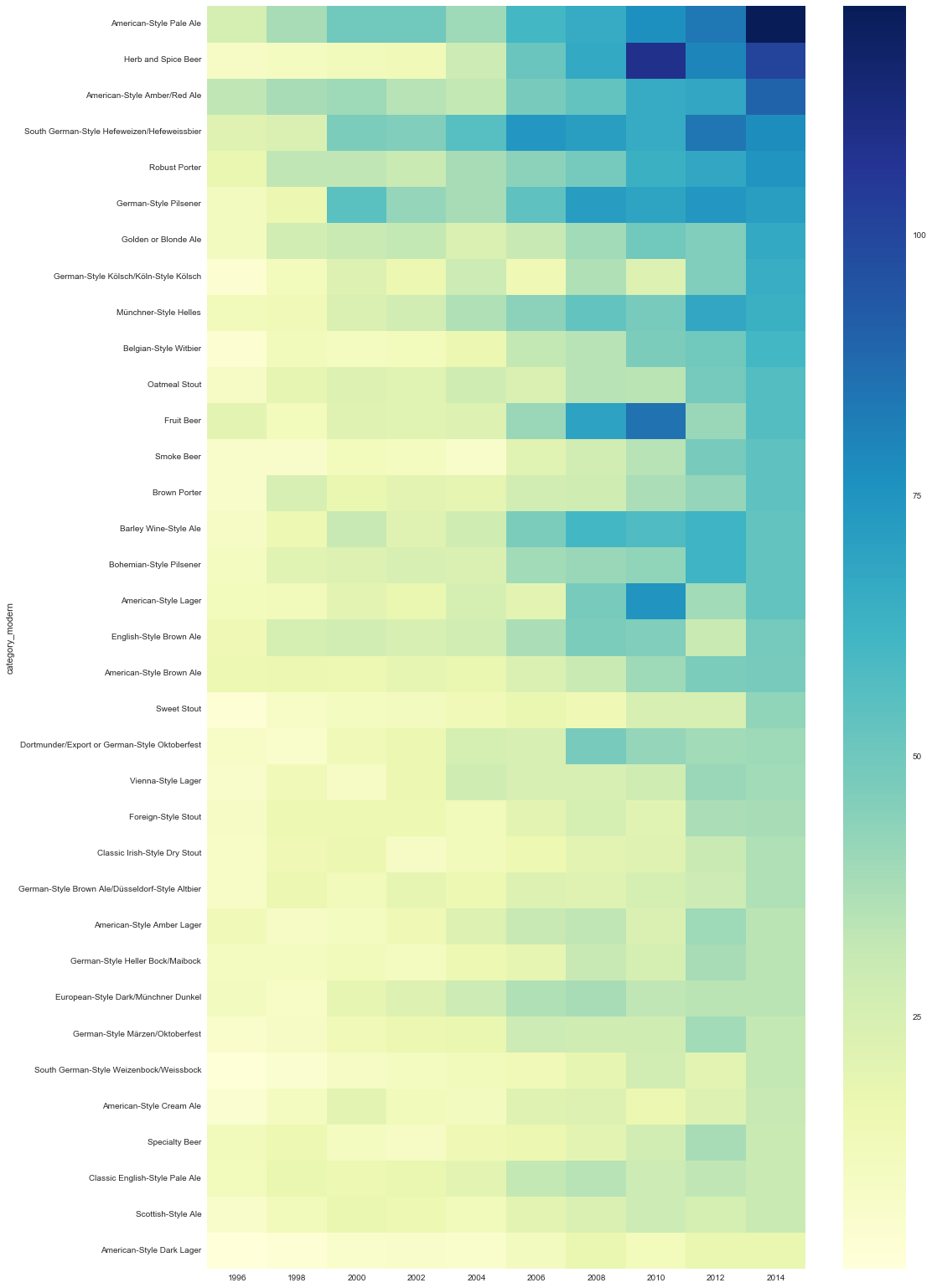 It turns out there are 35 categories, I call these The Ol’ Standby’s, that have appeared in each of the past 10 World Beer Cup competitions.

Sticking with The Ol’ Standby’s, I decided to render two more plots for the hell of it. While they’re both a bit messy and too busy to be of a great amount of help on their own I do believe they help compliment what we’ve covered so far. How so? With the line graph below we have an even clearer idea of the numbers we are dealing with by way of the y-axis. Additionally, the lines themselves help the eye identify the trend quite clearly by way of their slopes/angles: more beers. 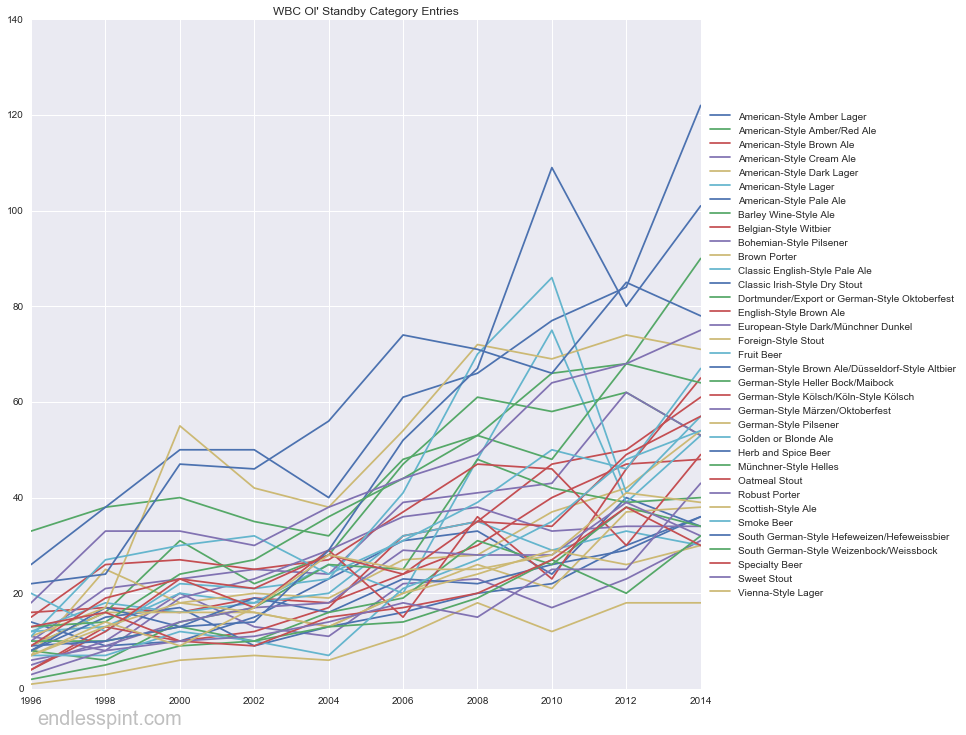 The trend may be less obvious here but the “clumpiness” gives an idea on the spread of entrant counts. 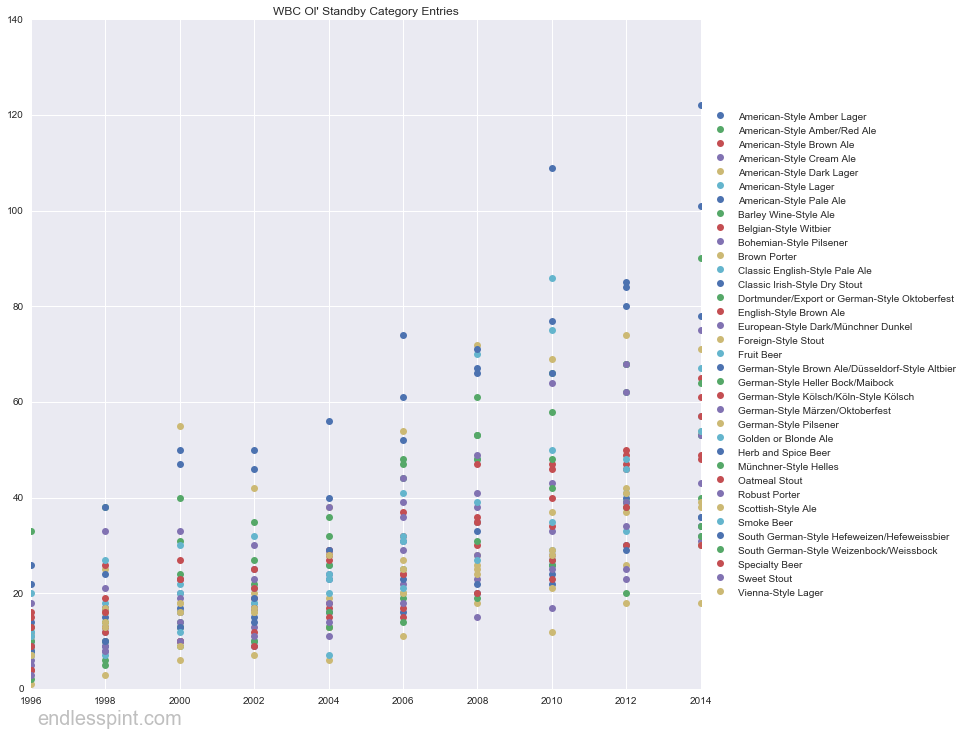 Finally, some simple descriptive numbers on what’s been going on for the 35 Ol’ Standby’s as a group.

And below is how I’ve classified the WBC top 10 recent categories by the sales report findings:

We certainly see some common ground between WBC category entry counts and market realities. This would seem to suggest that in the absence of market research or in avoidance of consulting fees you could use the competition as a starting point at getting an idea of the craft beer landscape. Perhaps using the competition as a factor in determining where new or existing breweries should focus their efforts for diversification and/or differentiation.

1 Things that make you go hmmmm:

By dropping me a message about "It's pronounced thermometer", forwarding to a friend, tweeting about it and/or signing up for the newsletter to receive advance notice of posted content, added site features and opportunities to make suggestions for future data-related beer pieces and miscellany.