Craft beer is here, hooray. There are more breweries and styles than ever before. Taste has won over mass produced piss and we may all rest easy now. Not so fast. While we may be experiencing a Golden Age in beer consumer options there is no guarantee these days are here to last. With more options come more challenges, opportunities, and developments.

Another one of these “devellengepportunities” is the change in consumer behavior present on both sides of the Atlantic with respect to where beers are being enjoyed. On-premise sales are down in the US. Meanwhile in the UK off-premise sales top bar purchases for the first time.

With the temperature dipping and dollars getting tight for the approaching holidays this is an opportune time to look at the options for New York City residents. Just because it’s cold outside doesn’t mean you can’t have your own little slice of craft beer heaven at home. And for less of a markup than at a bar.

Who needs the artificially dark enclosures of a bar to justify a little after work drink, or an afternoon one for that matter, when the season is changing and the natural light runs out earlier each day? In a week or two the clocks themselves will stumble back an hour. This may reset the darkened dawns but that light has to come from somewhere and it’s from your afternoons. Soon enough the best bit of daylight will come on your lunch hour. After you return to your desk and head back out again for home the entire city will have been enveloped in a cold dark blanket, as it if had been sunk to the bottom of the Hudson River itself.

The futile glimmers of light all about you come from office windows and streetlights. Head home where you can push back this dark enclosing with all manners of artificial light of your own: kitchen light, television, living room lamp, refrigerator door. And in the refrigerator make sure to have something worth warming your belly and your spirit. You better have something good to eat and drink because you don’t want to head back out into the cold darkness of the city. At least food gets delivered routinely and reliably, the same cannot be said for good beer. On your way home step into a trusted store and grab yourself a six, a bomber, or a mix of sorts.

Stopping over can also serve as a light and warmth oasis between your office and home or sightseeing and the hotel. With a solid pint in hand you can dim the light from your mobile or laptop. No need to fight so resolutely, comfortable in the knowledge of being home and snug.

Setting aside your local bodega, which I absolutely suggest you support first, second, and last, I went about identifying where to go should you only have two options, Whole Foods Market (WF) and Trader Joe’s (TJ). No matter where you find yourself in the city you can choose the store closest to you based on the map(s) provided.

In keeping with the holiday spirit and, coincidentally, the branding colors themselves, I’ve colored the store dots and respective Voronoi sections either red or green. My apologies to the color blind audience out there but I have not forgotten about you and provided a more color blind friendly version in a section below.

Manhattan Keeps on Makin’ It

The analysis is restricted to one borough, Manhattan, for reasons that will become obvious, if they are not already. Apropos of nothing, even with Brooklyn in ascension on the cool and global consciousness for a decade, two decades-plus, forever if you talk to native born Brooklynites, and who can argue with a place that gave us Walt Whitman, when you think of New York you think of Manhattan.

That aside, Manhattan sports a giant influx of people from commuters and tourists. Outside of the airports, which are always on the outskirts of cities anyway, many of the major transit hubs and terminals are in “The City”.1

The People Are Here

Even if you don’t live in Manhattan, or New York City for that matter, if home is nearby you or someone you know is very likely to work there. 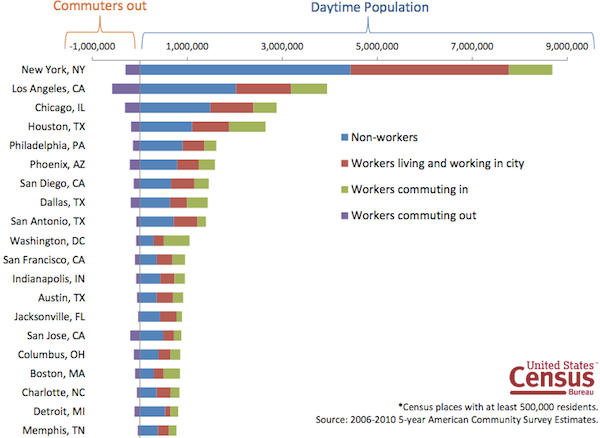 And the 212 takes in the majority of out of town commuters, with the borough population doubling on workdays. Besides Manhattan, only trendy Brooklyn has half or more of its workers living in the same borough, but only Manhattan does not see a decline in day time population (chew on that). 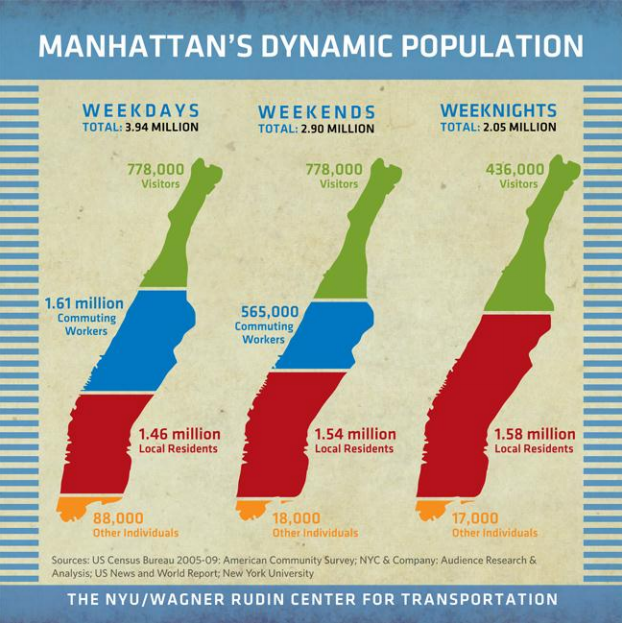 And so are The Stores

The other main reason to focus on Manhattan: that is where most of the stores are located and it makes for a more interesting piece to narrow our attention. The fact that there is a lone shop in Queens doesn’t make for very compelling analysis.

A few things stand out immediately. Whole Foods has more stores and covers more territory across Manhattan than does Trader Joe’s, stretching further uptown and down. While Trader Joe’s position at first glance appears to have relinquished the ground in Manhattan a second look provides appreciation for their coverage of an outsized area for their numbers.

In fact, Trader Joe’s placement of stores, both in-between Whole Foods Markets and right next door to them appears to be a very clever strategy. TJ has the Midtown and Downtown areas of the Eastside to themselves, the Upper West is mostly theirs as well, and the Bowery and Chelsea areas are a tossup due to proximity to WF shops. While the Whole Foods territory is quite expansive the subtle moves of Trader Joe’s places them in stronger positioning than a quick glance at the map would have you believe.

Lastly, if you look closely at the two Voronoi maps you will notice the Westside is not accurately rendered, with a TJ section overlapping what should be one for WF. This is an error to be fixed at a later date but serves as a funny coincidence that visually shows off the possible effect of my TJ description.

When it comes to non-commodity beer there is more to take into consideration than just how close a store is. There is also variety, exclusivity, price, and rotation.

Below is a quick and dirty cheat sheet based on anecdotal experience and supporting links. It is not meant to be the final word but rather a starting point of discussion.

I believe that’s enough ink spilled on these “big guys”. Next time we look at spatial analysis we’ll show love to the little guys in the craft game.

1 Going back to the first non-relevant point, let’s be serious, when people say “The City” they mean the five boroughs generally but if you had to be more specific it would be Manhattan. ↩

By dropping me a message about "Suds in The City", forwarding to a friend, tweeting about it and/or signing up for the newsletter to receive advance notice of posted content, added site features and opportunities to make suggestions for future data-related beer pieces and miscellany.